Insurance is still a mostly traditional market. However, some players are trying to modernize the industry. The millennial market has forced insurance brokerage models to evolve to address the changing priorities of consumers. A landscape dominated by the large captive agencies like State Farm and Allstate is slowly being replaced by insurance providers that give choices to the customer and provide advisory services.

We are going to compare two such brokerages trying to reshape P&C insurance: Brightway and Covered by SAGE.

Brightway and Covered by SAGE provide similar propositions but employ radically different delivery methods. How do they differ? Let’s take a look. 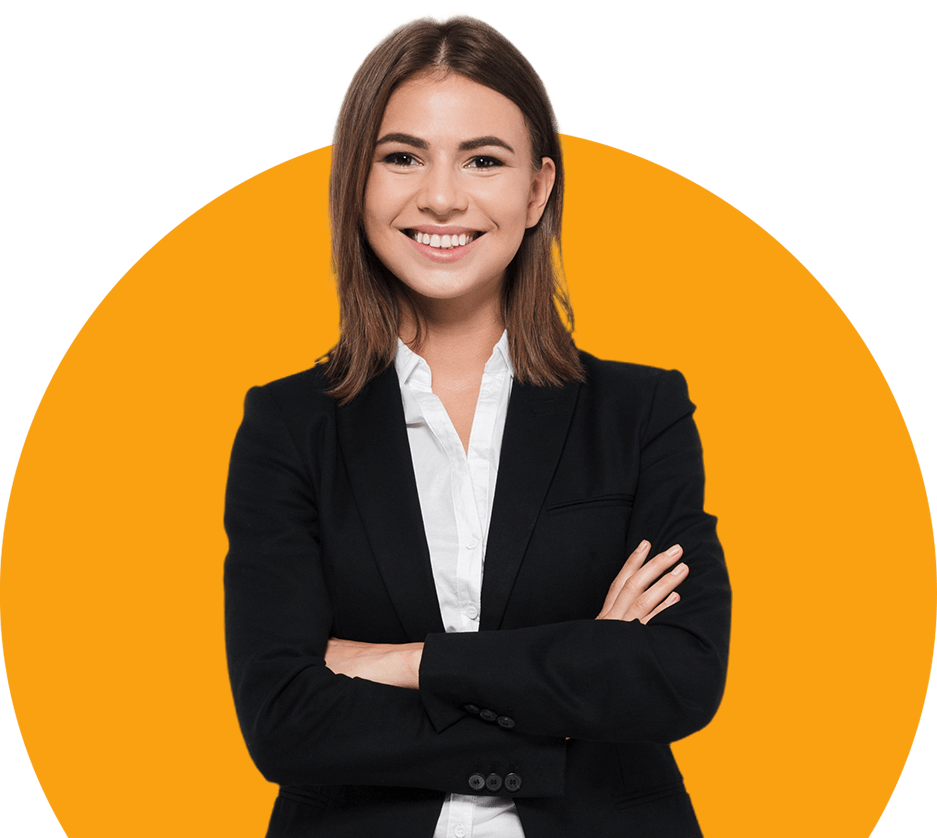 Brightway is an insurance brokerage that operates on a franchise model. Brightway agents have the backing of a reasonably trusted name, remote servicing assistance, and a degree of operational autonomy.

How do Brightway agents make money?

Brightway agents earn money based on a pre-agreed split with the franchisor. Depending on what kind of model you choose, the commission split varies from 85% to 50%. On all renewals, Brightway offers 50% commission to the agents.

How does Brightway make money?

Brightway primarily operates on a franchise model. As such, it has franchise fees and operational fees, and the split of the sales commissions from the agents.

Brightway’s franchise fee is a flat one-time non-refundable fee of $60,000. The total initial investment estimate for starting a Brightway franchise ranges from $90,000 to $180,000, depending on which state an agent will be operating in, the size of their agency, and a variety of other factors.

Besides this, Brightway also employs an out-of-pocket fee schedule, which includes:

It has recently started a non-franchise model of business too, but this serves more as a stepping stone into starting a franchise rather than a permanent option. While starting costs are significantly lowered, so is the commission that the agent earns.

Covered by SAGE is a relative newcomer to the insurance industry. It has been based in Georgia for the past few years, and there are plans to expand nationally in the coming years.

Like any newcomer looking to unseat incumbents from their pedestals, Covered by SAGE has a unique approach to solving age-old problems. The company is based on the belief that agents should be at the forefront of insurance, and its business practices highlight this. It is also backed by investors that have revolutionized the industries in which their companies are prevalent.

Covered by SAGE works on a brokerage model, and looks to facilitate the work its agents do with proprietary plug-and-play technology. Like Brightway, it also offers agents high-quality remote servicing facilities. However, it provides these services without any strings attached, unlike Brightway.

Similar to Brightway, Covered by SAGE agents make money through commissions from sales. The rate varies according to the line of business.

Covered by SAGE makes money exclusively from the commission split that it offers agents. It doesn’t charge any additional fees and does not require an upfront investment.

Because it does not charge any additional costs to the agents, Covered by SAGE’s success is intimately tied to the success of the agent.

Covered by SAGE is appointed with 28 carriers, and a few more are reportedly in the pipeline. Unlike Brightway, Covered by SAGE also allows its agents to sell commercial lines, and life and health policies.

How do they compare?

Brightway is a franchisor, and as such, there are a few strings attached to running a Brightway agency. As stated above, agents can enter the brightway insurance franchise through three different ways:

All of the options an agent chooses eventually lead up to owning a retail agency. These agencies are pricey to maintain, but also provide the highest commission splits at 85/15 for new businesses.

However, the additional costs and fees associated with running a retail outlet weigh down heavily on the eventual profits of the agent.

On the other hand, Covered by SAGE has no retail requirements. Agents can get onboarded with a $0 investment.  There isn’t even a technology fee, since its technology is proprietary and free-to-use for affiliated agents.

In terms of technology, Brightway falls behind Covered by SAGE as well. Brightway uses EZLynx for quoting and agency management, which is a powerful tool being used by most major agencies and agents on the scene today. However, Covered by SAGE offers its agents proprietary plug-and-play technology, which is more secure, easier to use, and highly customizable to the needs of its agents.

Brightway is also limited in terms of the lines of businesses it allows its agents to sell, which is only personal lines. This is a big handicap for agents, since commercial policies are usually bundled and have higher premiums than personal lines. On the other hand, Covered by SAGE provides its agents with the option to sell all lines of businesses, which include personal and commercial lines, and life and health policies.

Both Covered by SAGE and Brightway offer their agents a buyout. However, the right of first refusal for Brightway restricts the agent’s ability to transfer or be bought out once they no longer wish to be associated with Brightway. Conversely, Covered by SAGE has a straightforward buyout process, where agents get a guaranteed value that is a multiple of the size of their book of business. 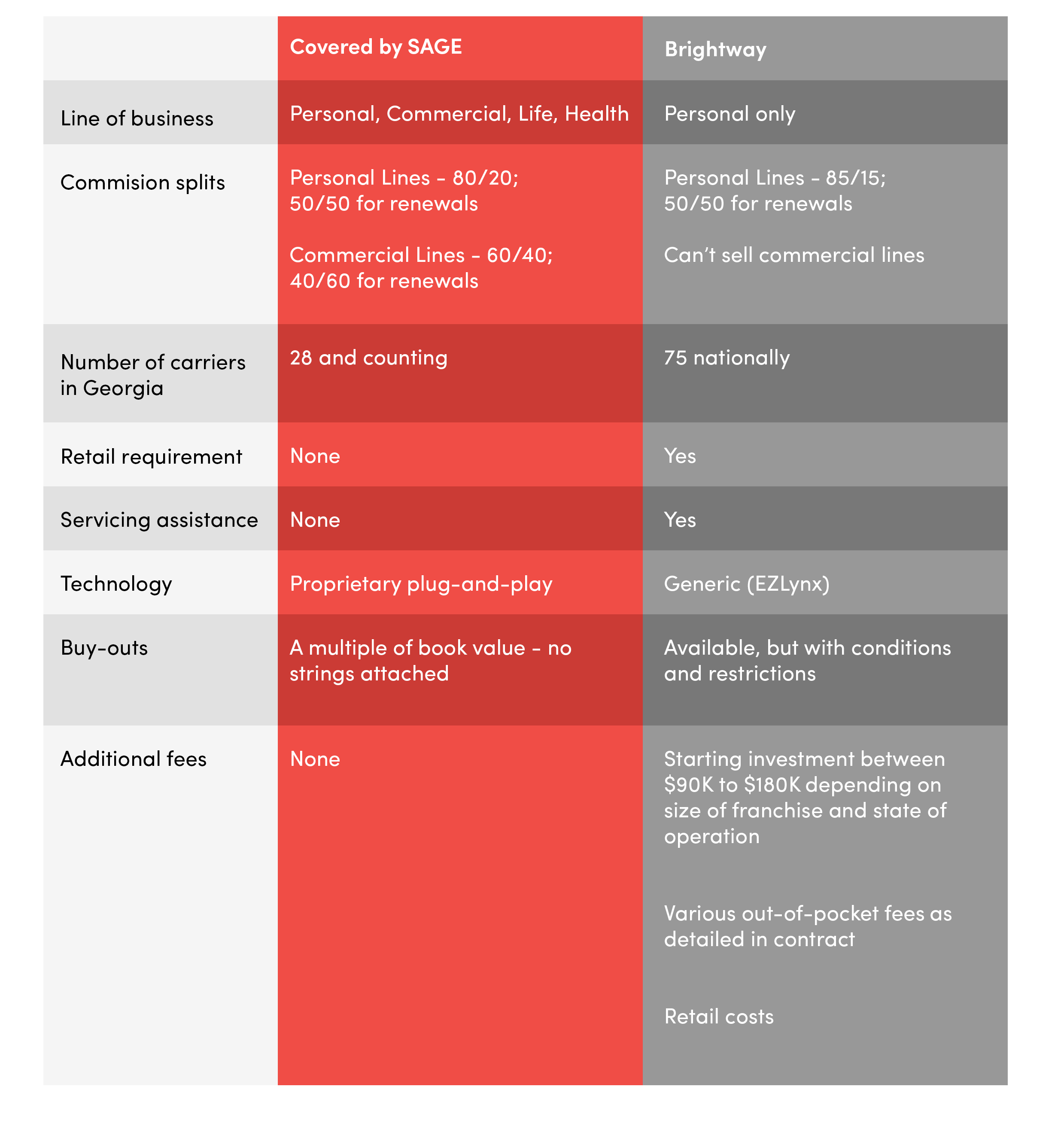 Brightway has been in the market for a longer amount of time; it has been operational for almost twelve years now. Its business practices are commendable, and its offerings are consistent across the board.

However, a franchisor will always attach strings to the franchisee, and as such, independence for an agent will not be as robust as it could be. Fees and other scheduled charges will deplete the agent’s revenue. Restricting the lines of business the agents can sell does not allow agents to flourish as much as they could.

Covered by SAGE is a newcomer, but it is here to solve the problems insurance agents face today, as opposed to a decade ago. Big captive carriers like Allstate and Nationwide have started to see the value of independent agents, and have forayed into the independent market in some capacity.

In a hyper-saturated market, Covered by SAGE is looking to shift the focus away from selling insurance to enabling agents to become risk advisors. The company maintains that technology can be a significant enabler for progress, and disruption through technology is not only inevitable but very necessary.

As such, its practices and policies allow an agent to flourish with minimal strings attached, and as the agent prospers, Covered by SAGE will thrive too.

For agents looking to join a modern brokerage that allows them freedoms while giving them a level of independence unheard of in the industry today, they should seriously consider joining Covered by SAGE.