Selling Insurance to Different Generations: The Best Approach for 2021

Selling insurance across generations can be a daunting task. Baby boomers are retiring and according to Inc.com, by 2025 millennials and Gen Z will comprise 75% of the workforce, globally. What each generation is looking for is different with differences in career choices, spending pattern, investment priorities and so on. Looking at the generations as a whole and coming up with a few strategies to market insurance might work. That is why as an insurance agent, viewing each generation separately and pinpointing their exact behaviors in terms of their needs, spending and savings could help crack the code.

Below are some things to keep in mind while approaching each generation for insurance sales. 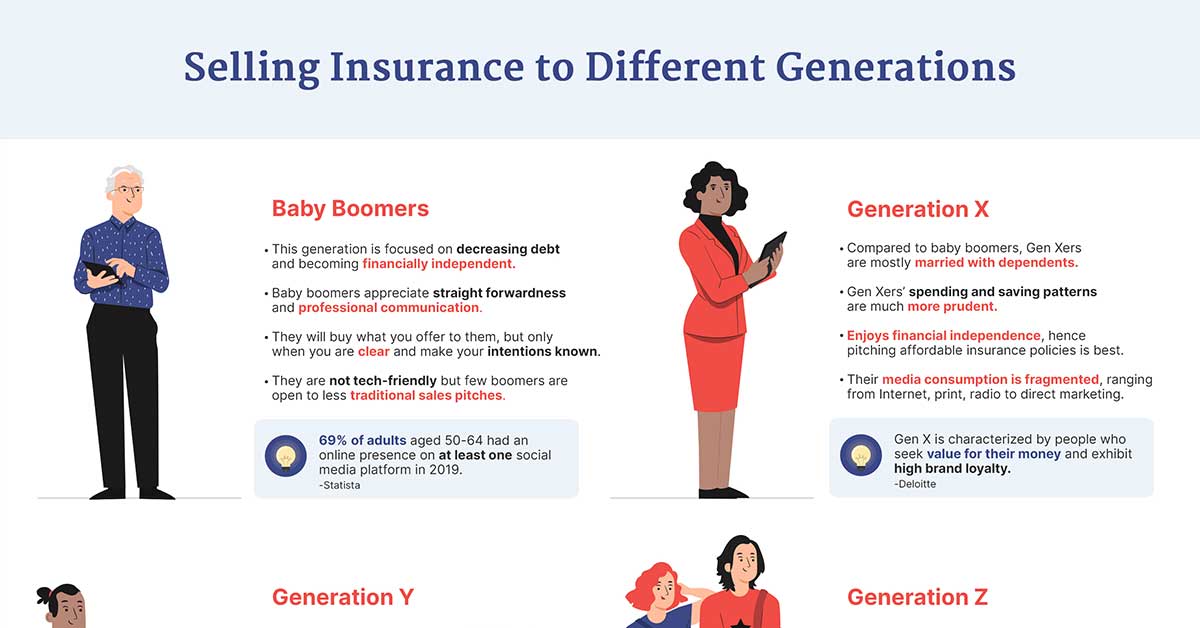 Baby Boomers (those born between 1946-1964) have either retired or are getting close to their retirement. By population they are still one of the largest groups with a number measuring at 75 million. The best way to sell insurance to baby boomers would be by being direct because they value that. Given their upbringing, boomers favor face-to-face interactions over using technology. However, while they find it difficult to naturally adapt to modern technological advancements, a certain percentage of boomers are still open to less traditional sales pitches. Statista stated that 69% of adults aged 50-64 have an online presence in at least one social media platform. In terms of communication, the majority of these individuals saw the advent of e-mail, therefore approaching and staying in touch with them through email-marketing is also quite favorable as long as it is professional. One of the main things to consider while selling insurance to baby boomers is how to gain their trust. They will buy what you offer to them, but only when you are clear and make your intentions known. 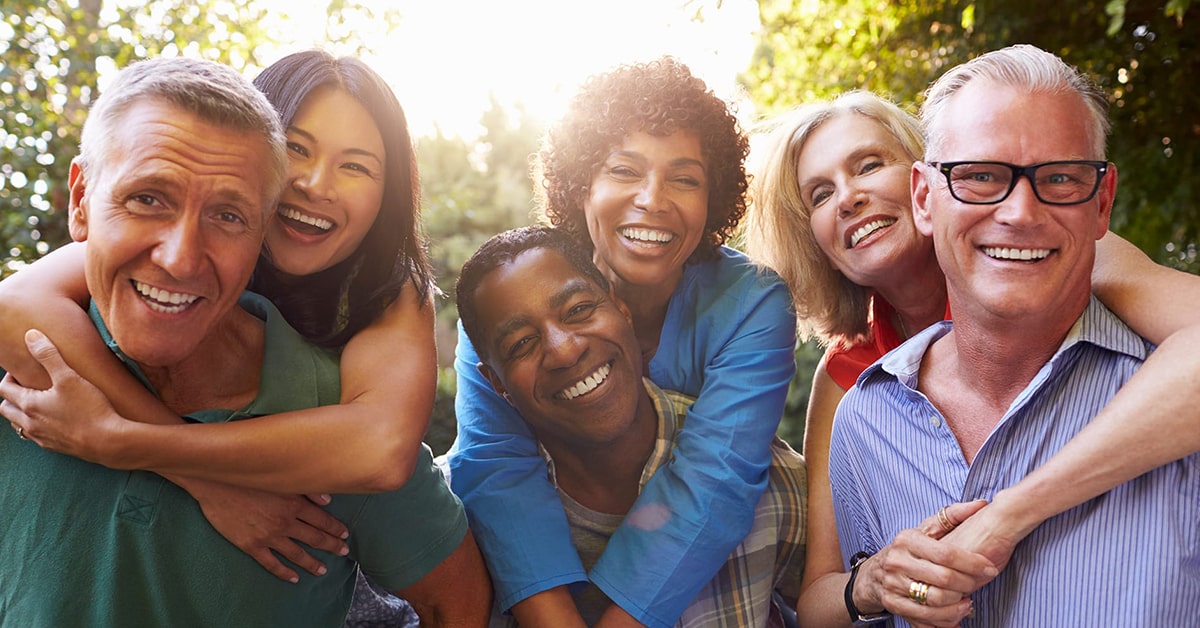 Known as the ‘forgotten generation’ in regards to wealth and investments, Gen X (born between 1965-1980) are the smallest generation. The group only consists of 66 million people out of the close to 333 million. When comparing this generation to baby boomers, they are evidently more conservative in terms of utilizing their available funds.

Gen X are mostly married people with dependents. Their needs differ and their spending and saving patterns are much more prudent. According to Deloitte, Gen X are usually people who seek value for their money and exhibit high brand loyalty. Additionally, their media consumption comes in many forms, ranging from Internet, print, radio to direct marketing.

Given these variables, it becomes imperative for agents to formulate their strategies for selling insurance. By offering tailored products and using different means of marketing and distribution channels. Since this generation is greatly concerned about decreasing debt and becoming financially independent enough to support themselves and their family, pitching insurance policies that are more grounded is recommended.

Millennials are the largest generation group, accounting for about 72% of the population in the United States. Born between 1981-1996, millennials are known as digital natives and lead other generations in their adaptation and use of technology. They think about communication differently by leveraging several social media platforms such as Facebook, Instagram, Twitter, Pinterest and so on. Most of their connections are digital, too. Naturally then, digital marketing works best for Millennials. Utilizing social media and email platforms are some of the preferred ways to stay in touch with them.

Their investment priorities differ too. A 2018 Valueinsured Modern Homebuyer Survey, showed that only 48% of millennials thought buying a house was a good investment. Millennials have also shown a certain proclivity towards ridesharing according to Deloitte’s 2020 North American Global Automotive Consumer Survey. Of ride-sharing millennials, 41% thought vehicle ownership was not necessary. In this regard, only 25% Gen X questioned the need to own a vehicle. While that suspicion was even lower–20%–when it came to the baby boomers.

Clearly, there seems to be a generational divide as far as investment patterns are concerned. Agents must be mindful about how such factors can influence insurance needs when they are selling insurance.

Gen Z were born between 1997-2012, and succeed millennials. They consist of a little over 20 percent of the population of the United States and it is estimated Bloomberg that they will account for nearly one-third of the world’s population by 2019, possibly outnumbering Millennials. As this generation is coming of age, a market survey by Forbes shows that they will have an estimated $44 billion in buying power, Gen Z is a cohort that one should not be missing out on when selling insurance.

Embracing individuality and independence, Gen Zers have always had information at their finger tip. In fact, when comparing Gen Z to the average consumer, they are 60% more likely to hang up if the phone is not answered within 45 seconds. Meaning, they place a premium on responsive customer service more than any other generation.

What’s more, as per  Rev Local, this generation wants to see more relatable people in marketing campaigns. When it comes to time spans, Altitude’s study revealed that Gen Z attention time span is as little as 8 seconds long. So, marketing via quick videos would more likely catch their attention.

One of the important traits of this generation is that they look forward into the future with a broader view of the world. Since they are a younger generation they instinctively wish to explore and learn from their life experiences in relation to work or outside of it. As per research done by Forbes, these individuals value independence and security. Hence, being able to relate to them on that level is a viable way to gain their trust. Just like millennials, Gen Z also values the words and trust other people have placed in your products and brand.

Selling insurance across generations warrants a nuanced approach. As an agent, the importance of considering things like their buying behavior, the best way to communicate with them, their preferred mediums and what they value cannot be overstated. What’s more, focusing on statistical analysis, multi-channel marketing and predicating trust relations can further help drive more profit and success. 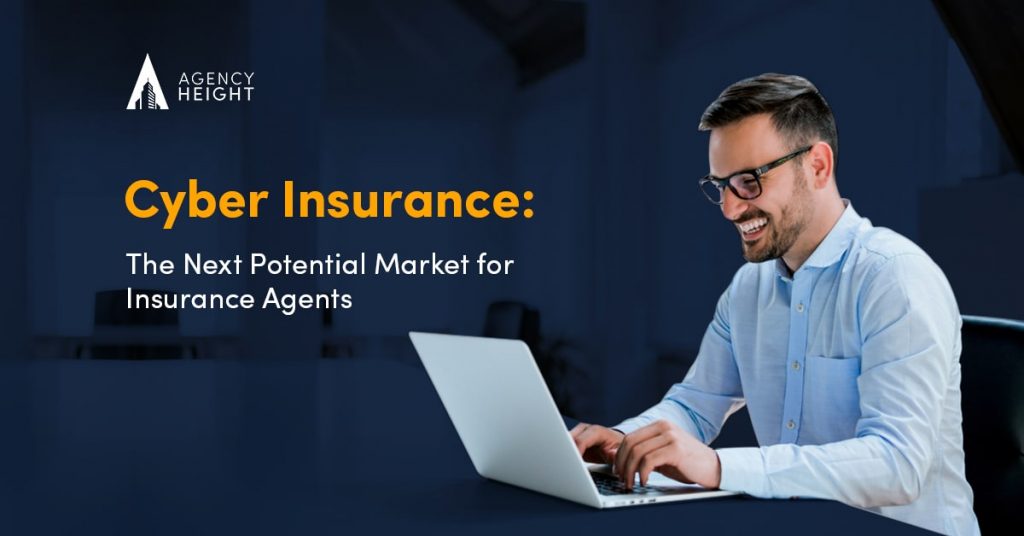 An Exciting Potential Market for Agents to Explore in 2021 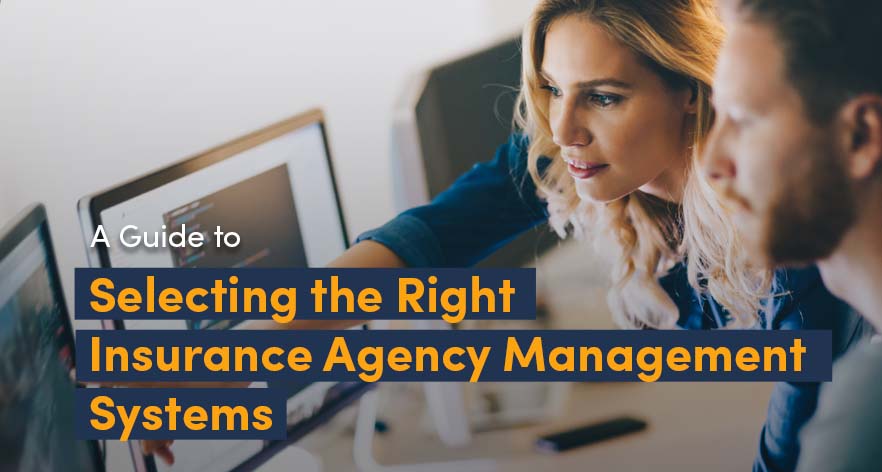 The Ultimate Guide for Insurance Agencies 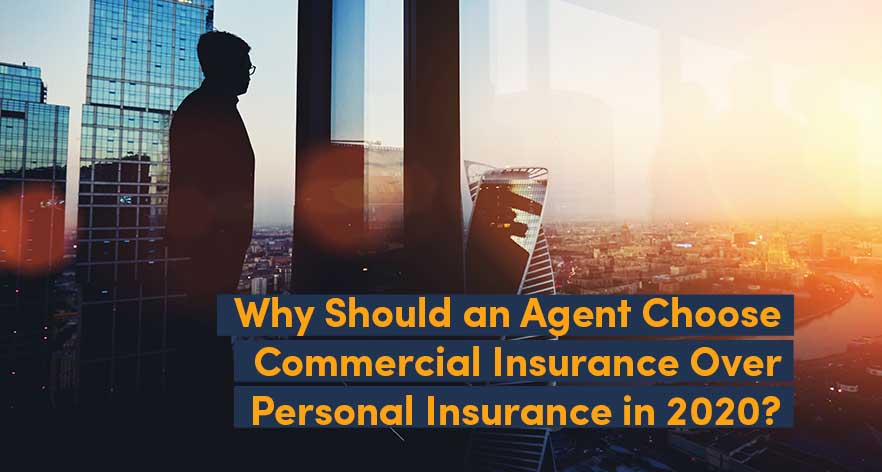